Gamma: 40hz -100hz
Gamma brainwaves are usually very weak in normal people but have recently been found to be very strong in Tibetan monks while doing a Loving Kindness meditation. 40hz becomes the dominant frequency of these monks while meditating and it is also the frequency that the core of Earth resonates to. A very important frequency when it comes to higher awareness and mystical experiences.

Beta: 12hz - 38hz
Beta states are the ones associated with normal waking consciousness. Low amplitude beta with multiple and varying frequencies is often associated with active, busy or anxious thinking and active concentration. It can be useful for people with ADD, depression or other emotional problems and can help with focused concentration, alertness and increasing IQ.

Awake but relaxed and not processing much information. Scientists have shown that highly creative people have different brain waves from normal and non-creative people. In order to have a creative inspiration, your brain needs to be able to generate a big burst of Alpha brain waves, mostly on the left side of the brain. The brains of creative people can generate these big Alpha brain wave bursts, and do so when they are faced with problems to solve. Normal and non-creative people do not produce Alpha brainwave increases when they are faced with problems, and so they cannot come up with creative ideas and solutions. Any time you have an insight or an inspiration, you know your brain just produced more Alpha waves than usual.

Theta: 3hz - 8hz
Theta waves have been identified as the gateway to learning and memory. Theta meditation increases creativity, enhances learning, reduces stress and awakens intuition as well as other extrasensory perception skills. Theta allows us to receive creative inspirations and is also responsible for many visionary and spiritual experiences. Out of body experiences can occur at theta frequencies as can spontaneous healings and other mystical experiences. The highest amounts of Human Growth Hormone are released at a high Theta frequency and the Earths ionosphere resonates to the same rhythm. This frequency is also where much of the brains normally unused areas become most active.

Delta: 0.5hz - 3hz
Delta activity is characterized by frequencies under 3 Hz and is absent in awake healthy adults, but is physiological and normal in awake children under the age of 13. Delta waves are also naturally present in stage three and four of sleep (deep sleep) but not in stages 1, 2, and rapid eye movement (REM) of sleep. Finally, delta rhythm can be observed in cases of brain injury and comatose patients. This is also the deepest state of meditation where profound psychological healing takes place if the practitioner can enter the state while retaining consciousness.

Epsilon: Less than < 0.5hz
Recently the brainwaves below 0.5hz have been classified as a separate band called Epsilon. Interestingly again we find that they are strongly related to the highest frequency brainwaves (Lambda) in that if you zoom in far enough you would see that embedded within the slow Epsilon frequency is a very fast Lambda frequency wave. The same states of consciousness are associated with both Lambda and Epsilon waves. Wholeness and integration seem to be the main themes of these brainwaves. 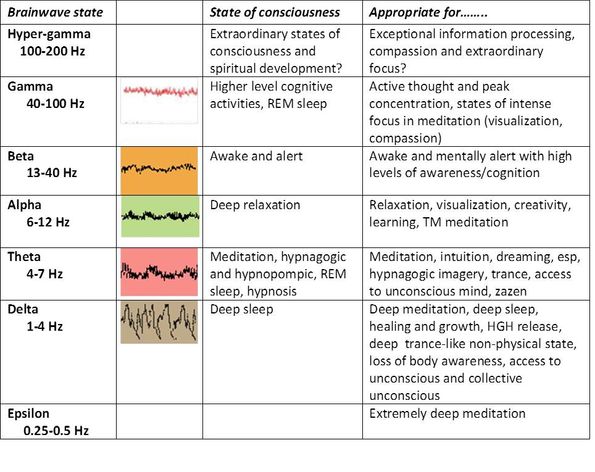 It is said that 8Hz is the fundamental “beat” of the planet. The heartbeat of the Earth is better known as Schumann resonance and is named after physicist Winfried Otto Schumann, who documented it mathematically in 1952.Schumann Resonance is a global electromagnetic resonance, which has its origin in electrical discharges of lightning within the cavity existing between the Earth’s surface and the ionosphere. This cavity resonates with electromagnetic waves in the extremely low frequencies of approximately 7.86Hz – 8Hz.

The “ordinary” thought waves created by the human brain range from 14Hz to 40Hz. This range only includes certain types of dendrites belonging to brain cells, predominantly within the left (the more rational) hemisphere of the brain, which is the center of activity.

If the two hemispheres of our brain are synchronized with each other at 8Hz, they work more harmoniously and with a maximum flow of information. In other words, the frequency of 8Hz seems to be the key to the full and sovereign activation potential of our brain.

8Hz is also the frequency of the double helix in DNA replication. Melatonin and Pinoline work on the DNA, inducing an 8Hz signal to enable metosis and DNA replication. A form of body temperature superconductivity is evident in this process.

432Hz resonates with the frequency of 8Hz

According to the harmonic principle by which any produced sound automatically resonates all the other multiples of that frequency, when we play C at 256 Hz, the C of all other octaves also begins to vibrate in “sympathy” and so, naturally, the frequency of 8Hz is also sounded. This is why (together with many other mathematical reasons) the musical pitch tuned to 432 oscillations per second is known as the “scientific tuning.”  This tuning was unanimously approved at the Congress of Italian musicians in 1881 and recommended by the physicists Joseph Sauveur and Felix Savart as well as by the Italian scientist Bartolomeo Grassi Landi.  In contrast, the frequency chosen in London in 1953, 440, as the worldwide reference frequency and which all music today has been tuned to, has come to be defined as ‘disharmonic’ because it has no scientific relationship to the physical laws that govern our universe. 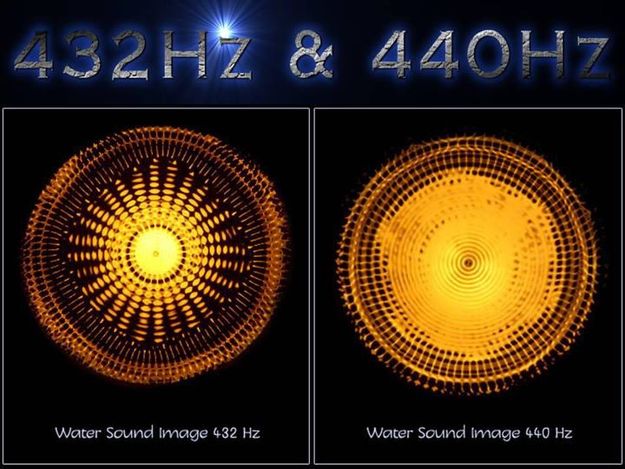 432Hz is the harmonic intonation of nature  According to the above information, playing and listening to music that has been tuned to 432Hz would make your body, and the organic world which surrounds it, resonate in a natural way. This would fill you with a sense of peace and well-being, regardless of the kind of song chosen to play or listen to.  Listening to 432Hz music resonates inside your body, releases emotional blockages, and expands consciousness. 432Hz music allows you to tune into the knowledge of the universe around us in a more intuitive way.
Mu : 8–13 Hz
Partly overlaps with other frequencies. It reflects the synchronous firing of motor neurons in rest state. Mu suppression is thought to reflect motor mirror neuron systems, because when an action is observed, the pattern extinguishes, possibly because of the normal neuronal system and the mirror neuron system "go out of sync" and interfere with each other.

Solfeggio frequencies make up the ancient 6-tone scale thought to have been used in sacred music, including the beautiful and well known Gregorian Chants. The chants and their special tones were believed to impart spiritual blessings when sung in harmony. Each Solfeggio tone is comprised of a frequency required to balance your energy and keep your body, mind and spirit in perfect harmony.

These Solfeggio frequencies make up the sacred Solfeggio scale:

This frequency liberates the energy and has beneficial effects on feelings of guilt. It cleanses the feeling of guilt, which often represents one of the basic obstacles to realization, enabling achievement of goals in the most direct way. The ‘Ut’ tone releases you from the feeling of guilt and fear by bringing down the defense mechanisms. 396 Hz frequency searches out hidden blockages, subconscious negative beliefs, and ideas that have led to your present situations.

The next main tone from the Solfeggio scale produces energy to bring about change. This frequency cleanses traumatic experiences and clears destructive influences of past events. When speaking of cellular processes, tone ‘Re’ encourages the cell and its functions in an optimal way. 417 Hz frequency puts you in touch with an inexhaustible source of energy that allows you to change your life.

Tone ‘Mi’ is used to return human DNA to its original, perfect state. This frequency brings transformation and miracles into your life. The process of DNA reparation is followed by beneficial effects – increased amount of life energy, clarity of mind, awareness, awakened or activated creativity, ecstatic states like deep inner peace, dance and celebration. Tone ‘Mi’ activates your imagination, intention and intuition to operate for your highest and best purpose.

Another frequency from the sacred Solfeggio scale. It enables creation of harmonious community and harmonious interpersonal relationships. Tone ‘Fa’ can be used for dealing with relationships problems – those in family, between partners, friends or social problems. When talking about cellular processes, 639 Hz frequency can be used to encourage the cell to communicate with its environment. This ancient Solfeggio frequency enhances communication, understanding, tolerance and love.

It cleans the cell (“Solve polluti“) from the toxins. Frequent use of 741 Hz leads to a healthier, simpler life, and also to changes in diet towards foods which are not poisoned by various kinds of toxins. Tone ‘Sol’ cleans the cell from different kinds of electromagnetic radiations. Another application of this sound frequency is solving problems of any nature. The fifth frequency of the Solfeggio scale will also lead you into the power of self-expression, which results in a pure and stable life.

Tone ‘La’ is linked to your ability to see through the illusions of your life, such as hidden agendas of people, places and things. This frequency can be used as means for opening a person up for communication with the all-embracing Spirit. It raises awareness and lets you return to spiritual order. Regarding cellular processes, 852 Hz enables the cell to transform itself into a system of higher level.

This tone awakens any system to its original, perfect state. It is connected with the Light and all-embracing Spirit, and enables direct experience, the return to Oneness. This frequency re-connects you with the Spirit, or the non-vibrational energies of the spiritual world. It will enable you to experience Oneness – our true nature.

The lowest of the tones appears to be a natural anaesthetic. It tends to reduce pain physically and energetically. 174 Hz frequency gives your organs a sense of security, safety and love, encouraging them to do their best.

This frequency helps return tissue into its original form. 285 Hz influences energy fields, sending them a message to restructure damaged organs. It also leaves your body rejuvenated and energized.